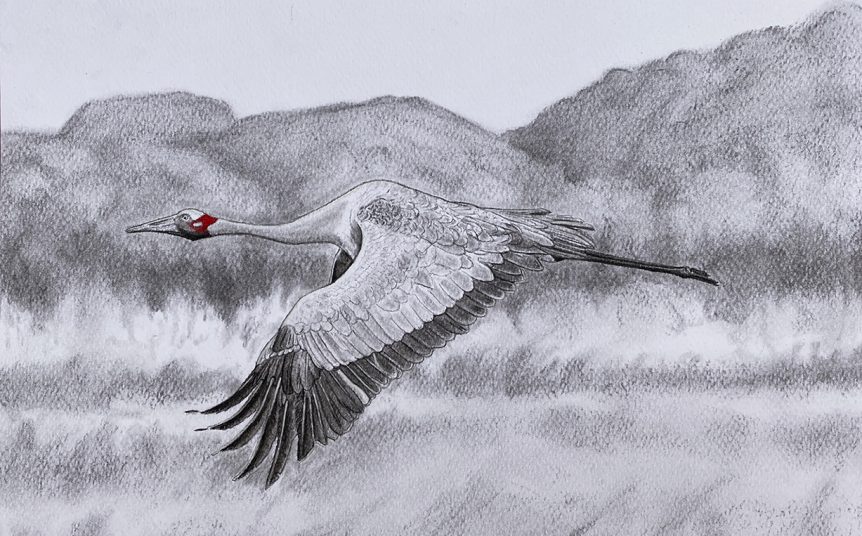 The timing for this work couldn’t be more opportune, with last year's sad news by the Australian Broadcasting Commission of terrible mismanagement of the Kakadu National Park and its many species by Parks Australia, part of the Australian federal Department of Agriculture, Water and Environment. The award winning ABC program of Four Corners reported on 22 February 2021 the Department's inability to work effectively with the First Nation native title owners, creating major difficulties for conservation and tourism. Such a rare and wonderful resource must be protected and cherished for future generations of all the wildlife, plus humans! I hope this work is a reminder of this necessary and urgent conservation need!

I have wanted to paint the Australian brolga ever since I saw of flock of brolgas flying over the wetlands of Kakadu in the late 1980s. At the time I was attending a tourism meeting at the then new Crocodile Hotel and had a wonderful opportunity to explore a section of the World Heritage listed National Park. The brolgas’ graceful flight just blew me away!

I have featured birds in many of my paintings over the years – the Western Australian bustard, the emu, the kookaburra, pelican and Adelé penguin have all starred. More recently eagles have made an appearance in my works as smaller elements of my landscapes. So finally, I have decided that my wonderful memories of Kakadu, featuring the magnificent Brolgas, should become a major work. 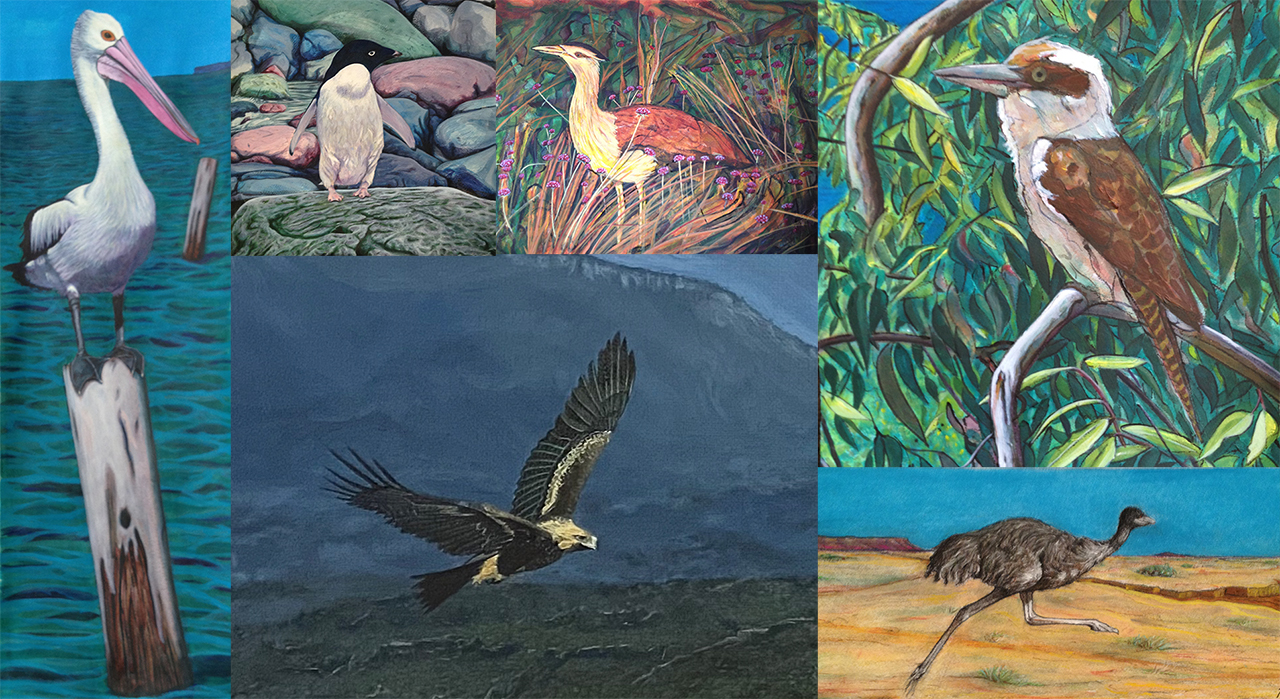 Featured Australian birds within six of my paintings.

To start the project, I used photographic reference to draw a male and female brolga, a mating pair flying across its wetland territory in Kakadu. The birds are the central feature in this work. I have chosen the format of a diptych, two paintings acting as one. Each painting features one of the brolgas – the lead left hand painting is the larger stockier and older male, who is being followed by the younger slender female. They are in tandem flying over their wetland territory seeking nesting materials.

Through charcoal drawings below I familiarised myself with each of the brolgas salient features and hopefully this work highlights the extraordinary grace of these birds in flight. Please see below.

Brolgas (a popular name derived from its official scientific name of Gamilaraay burralga) are also known as the Australian crane. They are the world’s largest of the crane family with a wingspan of up to 2.4 metres and often standing tall at 1.4 metres. They are the heaviest of all birds on the Australian mainland, with males larger than females, the largest weighing in at 8.7 kg.

Brolgas are monogamous, breeding pairs mating for life – a lifespan of approximately seven years. Brolga pairs are known for their synchronous calling, usually initiated by the female. Like all cranes they offer an incredible display of ritual mating dancing. They are found plentifully throughout northern Australia – particularly the Northern Territory and northern Queensland, with limited numbers occurring in Australia’s south-east – Victoria and New South Wales.

Wetlands are an important element of their habitat, with breeding pairs utilising freshwater wetlands as their breeding ground and nursery, and defending it against other brolgas. The close-knit family unit is all-important for the brolga, and though they can join flocks of up to 1,000 birds, within these flocks family units often still remain together.

The painting also showcases the wonder of the Kakadu National Park– its wetlands and the Park’s spectacular rocky scenery. This backdrop is a slice of my brief memories of the Park with assistance of research.

I painted this diptych over a year, whilst working fairly constantly as a ghost writer on a book about Japan. I started by redrawing each bird from my initial drawings on separate canvases – each 107 x 71 cm. – the diptych in total measuring 214 cm. across. These paintings are designed as a major wall feature. My painting strategy was to first paint my memories of the spectacular Kakadu wetlands – not a specific place but the imagery that still lingers in my mind after 32 years. As a dreamscape my paintings were purposely stylised.

I have now completed the project, included many of the animals that I saw during this memorable safari – Lacewing butterflies, Agile wallabies, compulsory green frog, a flock of Gulahs, a black cockatoo and even a Flint water snake – all memories of these magnificent wetlands. The final stage of work was to paint the highlights of late afternoon sunshine and reflections. I hope you enjoy the results! 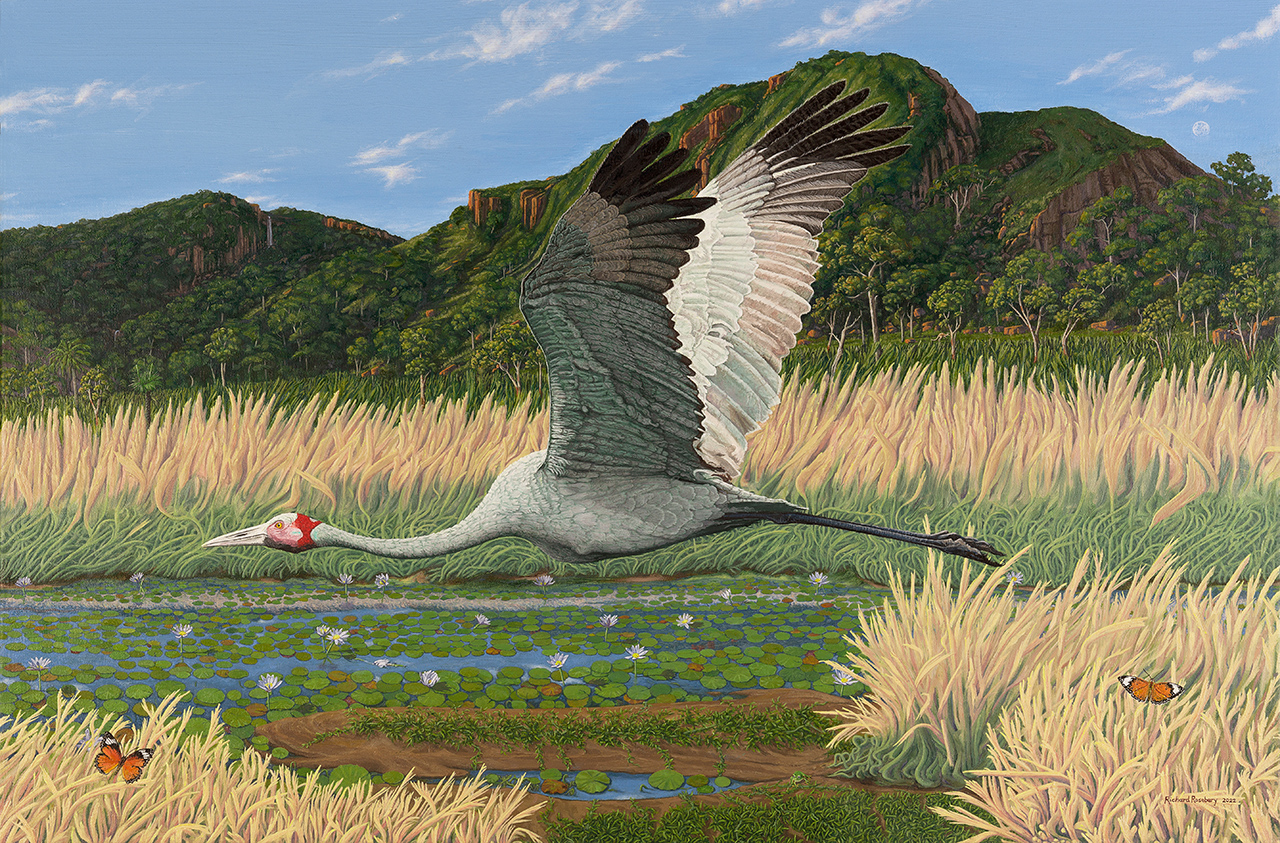 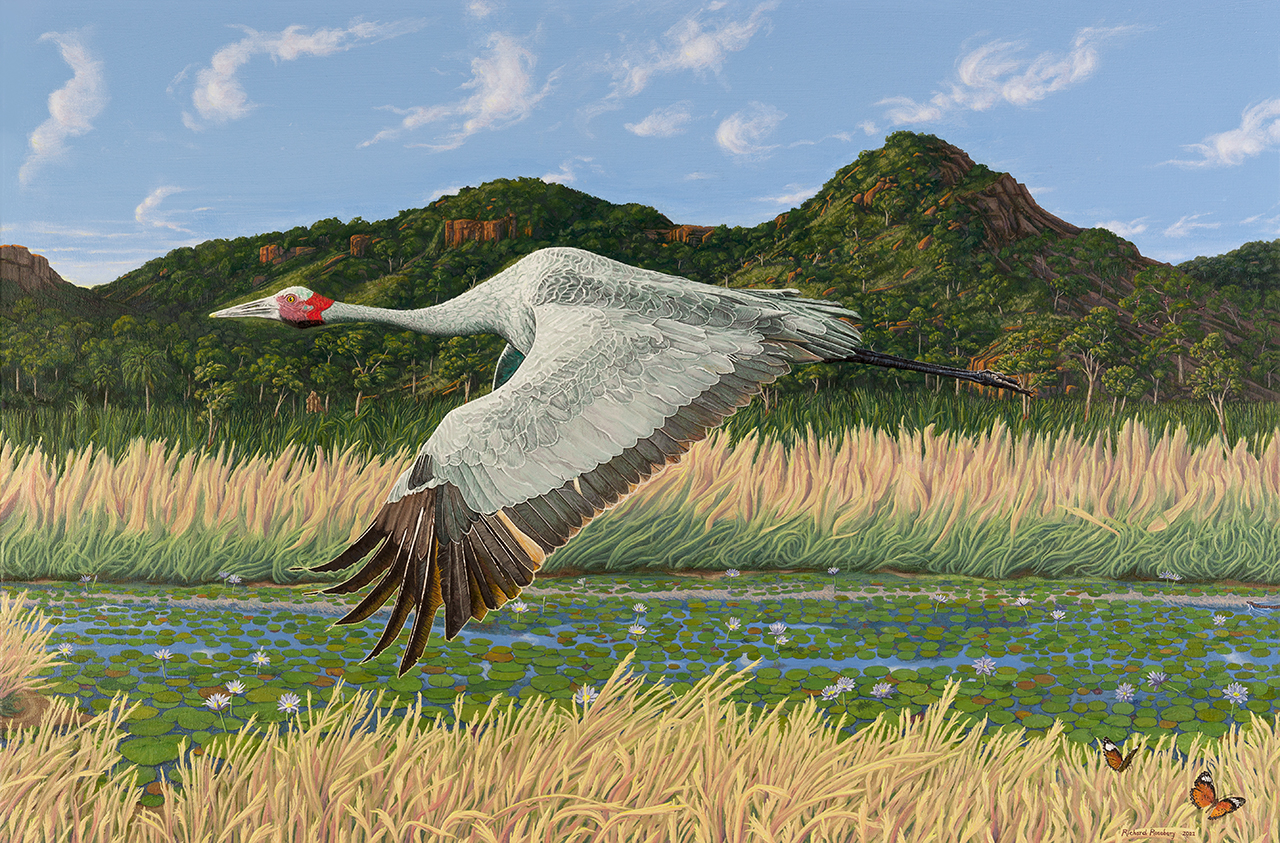 Below are images of detail. Background, foreground and other creatures to give you an idea of the depth these paintings offer the viewer. 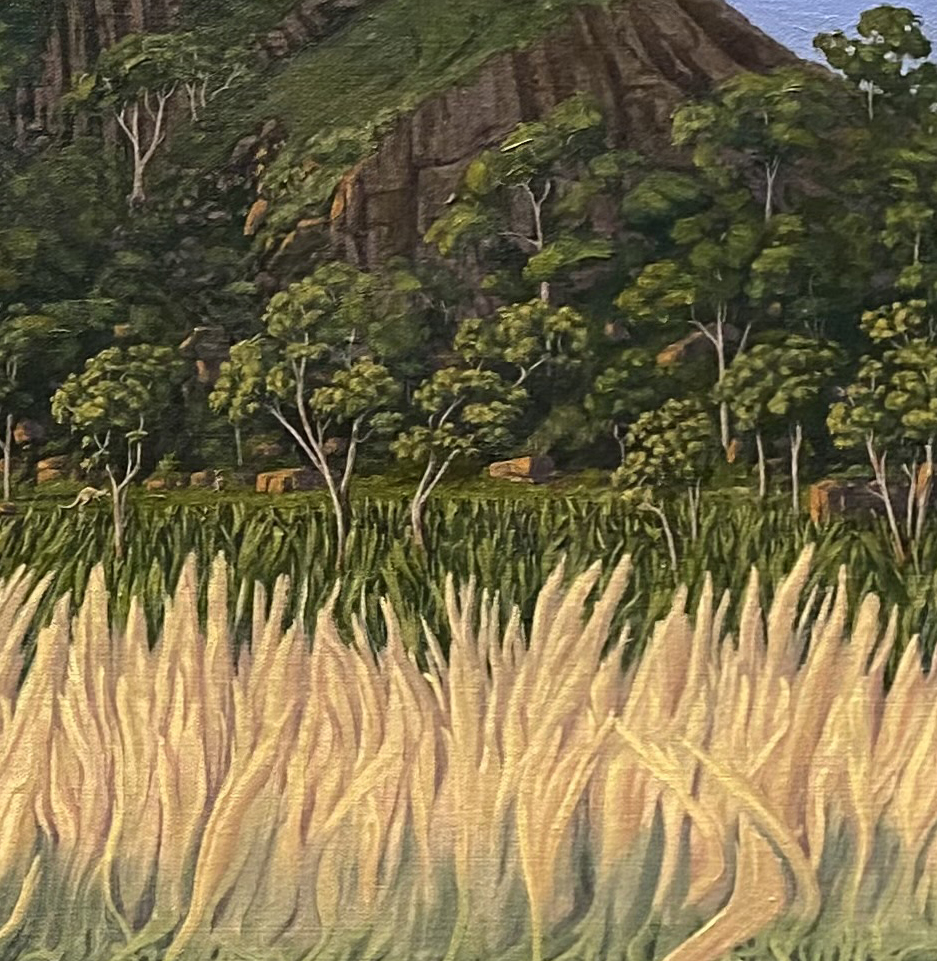 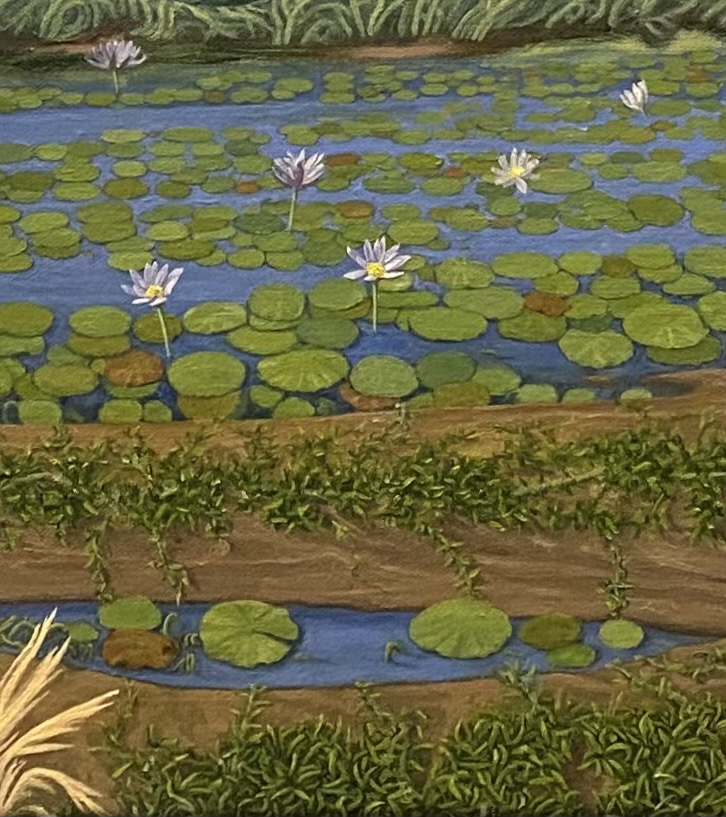 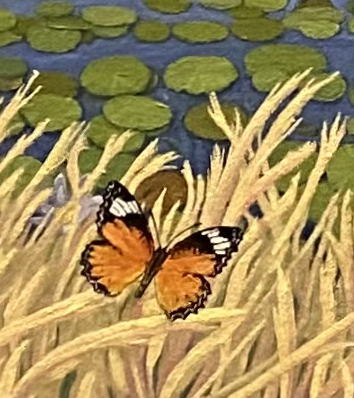 Learn what drives my art
Close the Content Dock